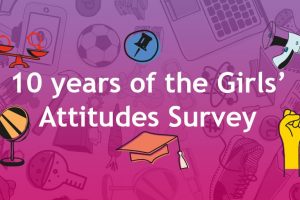 2018 marks 10 years of the Girlguiding UK Girls’ Attitudes Survey. The survey asks girls and young women aged seven-21 their opinions on growing up as a girl.

Within the survey questions are split into seven categories: education, leadership, aspirations and role models, appearance pressures, happiness and wellbeing, social action, safety and socialising and growing up as a girl today.

A decade of research has revealed a change in what girls and young women want from their education.

in primary school, an equal number of female head teachers,

and a curriculum that’s gender neutral and teaches about the

The overall interest in STEM subjects has steadily risen over the last 10 years now with 43 per cent of seven to 10 year olds enjoying ICT compared to 19 per cent in 2009.

For 11 to 16 year olds there is an increased interest in physical education, English, maths and science while interest in art has decreased by 14 per cent.

When asked what they want to learn at school more than half of 11 to 21 year olds said money management and finance. Half said they think all schools should have to teach citizenship, democracy and human rights.

The findings also revealed that careers advice services in schools have improved.

These changes in attitude could be down to a number of factors: a more engaging curriculum, an increase in female role models or a bigger conversation about gender equality in education and general life.

Have you noticed a change in interest during the last 10 years? Let us know on Twitter.