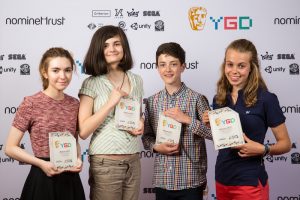 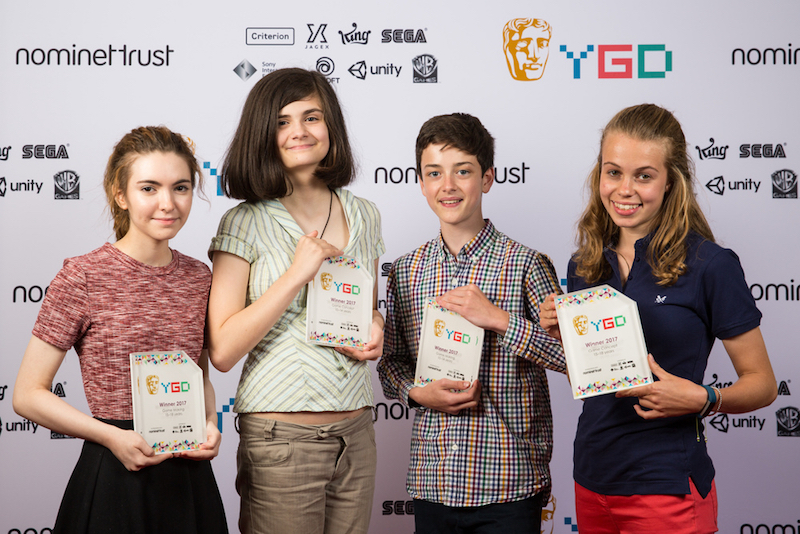 BAFTA (the British Academy of Film and Television Arts) has announced the winners of its prestigious Young Game Designers (YGD) competition, run in association with the Nominet Trust.

Four young aspiring games creators and an inspirational teacher were all awarded prizes at a special ceremony held at BAFTA HQ hosted by Dev Griffin (BBC Radio 1) and Georgie Barrat (The Gadget Show).

The BAFTA YGD competition, which began in 2010, is open to young people aged 10-18 years and draws hundreds of entries from schools and young people every year. The popular awards programme, which is supported by a wealth of free curriculum linked resources, is designed to encourage young people to develop creative, coding and narrative skills and to recognise games development as an exciting career option.

Awards are presented in two main categories: The Game Concept Award, for a written idea for a new game; and the Game Making Award, for a game made using computer software. The winners, chosen by a jury of industry experts, were:

The four young winners will now be mentored by top talent from the games industry, will be hosted at tours of leading games studios and will prototypes of their games created by a team of developers.

In a message of support to all the young finalists and educators recognised, HRH The Duke of Cambridge, President of BAFTA, said: “I am always so impressed with the unique ideas and game-making skills displayed by our Young Game Designers. This year’s finalists prove there is a huge amount of talent within the UK and it is tremendously exciting to see young people so passionate about a craft that could help to launch their career in the British games industry.

“With a large number of entries coming through schools this year, it is encouraging to see teachers and educators regarding BAFTA’s initiative as a valuable means to equip their students with digital skills.”

Dave Chilver, Teacher of IT and Games Design at Lowestoft Sixth Form College won the Young Game Designers Mentor Award in recognition of his inspirational teaching in the field of games design. Throughout his 10-year career Dave has promoted games as a viable career path rather than simply a media to be consumed and runs extracurricular game design and coding sessions.

Speaking about his win, Dave commented: “Being recognised by BAFTA is a real honour and sharing the stage with so many gifted young games designers was exciting too. These young people are our future and it’s great to know that there is so much talent out there. Initiatives like the BAFTA Young Game Designers Awards are so important in raising the profile of games design and inspiring young people to pursue careers in the creative industries.”

The BAFTA YGD competition is part of a year-round programme of activity that gives young people and educators unique insights into the games industry and access to the creative minds behind some of their favourite games. Support includes: a website (www.bafta.org/ygd) where BAFTA members, award winners and nominees share their insights and advice and a range of teaching resources that link the BAFTA YGD competition to the national curriculum.

For further details about the initiative, visit www.bafta.org/ygd.