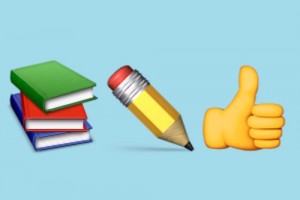 A study of over 120,000 entries for a short story competition has shown that children’s language is changing because of the rise of social media.

The report found an increasing popularity of terms including “hashtag”, “selfie” and “emoji” in children’s writing.

Evans said: “The OUP’s research for Radio 2’s 500 Words confirms just how incredibly creative children can be. They are so often at the forefront of both adopting and adapting to new language trends and using them in all manner of inventive ways.

“It’s clear that story-telling remains a hugely important part of a child’s life, and that we as parents should do whatever we can to help them enjoy the worlds they create on paper.”

Vineeta Gupta, head of children’s dictionaries at OUP, said: “Language is constantly changing and adapting. Children are true innovators and are using the language of social media to produce some incredibly creative writing.”

Researchers compiled a top 20 of words which have increasingly been used during the past 12 months which included popular social media brands YouTube, Snapchat and WhatsApp.

*This project/work has been undertaken with the support of SCVO’s Business Growth Graduate Internship programme, funded through the European Regional Development Fund (ERDF), Scottish Government and Creative Scotland.