Learn Gaelic in the classroom with Go!Gaelic 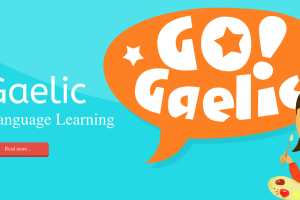 Go!Gaelic is a great way to learn Gaelic in the classroom. Go!Gaelic is a vast online suite of sequenced resources designed to support teachers and created by Stòrlann Nàiseanta na Gàidhlig, the Gaelic educational resources organisation based in Stornoway on the Isle of Lewis but with a responsibility to schools teaching Gaelic all over Scotland.

Go!Gaelic does not aim to deliver fluency, unlike Gaelic Medium which is immersive in nature, but is designed as a complete introduction to the language. It is expected to appeal to adult learners as well but its main function is to support Gaelic teaching in English Medium primaries.

It has been designed to fit in with the Scottish Government Policy Language Learning in Scotland: a 1 + 2 Approach, which is aimed at ensuring every child has the opportunity to learn an additional language from primary one onwards and a third thereafter.

This policy stipulates that, additionally, every child should have the right to learn a second language from primary one onwards — and the policy aims to be implemented across the country by 2020.

As a language course, the structure of Go!Gaelic has been designed to build on previous learning. And, as a child progresses through it, their successive achievements should match up to the formal list of ‘Experiences and Outcomes’ that a teacher will look for under the different stages of Curriculum for Excellence.

The course, which covers 20 topics including introductions, feelings, weather, pets and hobbies, has also been designed to sit well within the Common European Framework of Reference for Languages. This is the Europe-wide guide to language learning, setting out what kinds of topics, words and sentence structure should be taught — and with what increasing difficulty — in order to give a learner the best chance of success.

Go!Gaelic has followed this type of progressive model, for example with the Core Language part of the programme and How the Language Works, which explains grammar features such as sentence structure.

Go!Gaelic includes a wealth of resources that can be used in the classrooms, from worksheets and animations to posters, revision cards, planners and more. It also features audio files – songs as well as vocabulary – plus a series of 20 short films, based on the ‘Cafe Lily’ theme and each one matching one of the topics, to reinforce learning in an entertaining way. There is also a Go!Gaelic App available.

A new development for 2018 is the production of [email protected] which aims to widen the project for use by parents and early years leaders. A Co-ordinator will be appointed to work on the development of a language framework and conversion of materials to a suitable format for both groups.