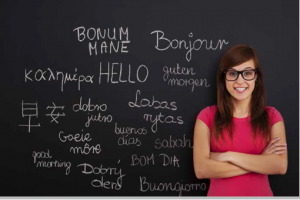 With the introduction of the Scottish Government’s ‘1+2 approach’ to language learning from primary one, the spotlight is back on languages in school – but as it’s no longer compulsory for students to take a language in secondary, how are schools encouraging pupils to keep going with French, Spanish, Gaelic and beyond? We caught up with the team at Scotland’s National Centre for Languages and one teacher whose department is bucking national trends in language education…

As Scotland becomes more multicultural and the job market increasingly international,
languages are becoming crucial in both work and life. Spanish, German, Mandarin, French, Greek, Portuguese… There’s no limit to how far a language can take you. So why are fewer pupils choosing to study a foreign tongue?

Modern languages have always had a tough time of it in Scotland’s schools – and things have been worse since it was decided that the subject area should no longer be compulsory from 2001 onwards. Stats from last year showed that just 77% of Glasgow S4s stick with a language, compared to 91% ten years before.

Fhiona Fisher, acting director at SCILT, Scotland’s National Centre for Languages, says that, despite what the figures say, things aren’t as bad as you’d think for language learning in Scotland.

SCILT supports languages teachers and promotes language learning at all stages. From professional learning opportunities to competitions in schools, SCILT staff – all teachers themselves – are teaming up with schools to increase uptake of languages at all stages.

Gillian Campbell-Thow, principal teacher of modern languages at All Saints Secondary in Glasgow, is one teacher whose department is doing exactly that. Gillian’s department is teaching French, Italian, German and Spanish at all levels, and the SQA’s Language for Life and Work award is also a popular subject choice.

“Languages are so important, but my big thing isn’t about children going abroad – it’s about them staying here and being able to communicate,” explains PT Gillian, who also won teacher of the year at this year’s Scottish Education Awards. “Learning a language promotes tolerance and understanding, and from there, communication skills. I think what we have to do is contextualise it for young people and show them that this is something that’s not only a valuable tool, but it’s something that’s enjoyable, fun and attainable as well.”

All Saints, in some ways, may not be the school where you would expect modern languages to flourish – it’s located in an area of high social deprivation with more than a third of its 1,000 pupils getting free school meals. It’s also a school which has 33 different languages spoken amongst its pupils – a factor which Gillian and her department have embraced when it comes to promoting different cultures.

“Besides the nuts and bolts of the teaching and learning, it’s about taking the language outside of the classroom and outside of the department,” Gillian says. “We do a lot of inter-departmental work, we do restaurant visits, cinema visits, visits to different cultural institutes and, where we can, we’ll do trips. It’s about making it real. A lot of that comes from the real passion and energy that my staff have. I work with probably the best team out there.”

With the introduction of the 1+2 approach – languages are now being promoted as a central part of learning from Primary 1 onwards, with all pupils are expected to have covered two different languages by the end of primary school – the Scottish government is recognising the importance of languages.

“The most powerful thing about 1+2 isn’t that we’ll be sending out generations of young people who are bilingual – we know that isn’t going to happen,” Fhiona says. “But what it will do is normalise language education. It’s about making it an integral part of the school curriculum; on a par with every other part of the curriculum.”

Last year, the Centre worked with nine pilot schools to pick out and work on different recommendations from the 1+2 report, all with great success. From the school which has been teaching languages to ASN pupils to those setting up business links, there has been some terrifi practice, all of which is documented on the SCILT website.

The way in which languages are taught has changed dramatically. Gone are the days of rote learning, with more schools embracing out-of-class opportunities, trips, IT and tapping into modern cultural references in the language’s country of origin – all while linking it to real life situations.

“Sitting in rows, chanting verbs – that’s not what language learning is about,” Fhiona says. “I think our
Business Language Champion programme is a really good thing – we link up schools with local businesses which use languages. You’re showing the employability skills you can develop by learning a language and that it will actually increase your life chances.”

With the right attitude, enthusiasm and making lessons relevant to pupils and their interests, languages can flourish in the classroom – and kids will really embrace it.

“Broad general education has really given us the opportunity to turn the curriculum on its head – we’re able to deliver up to date language,” Gillian emphasises. “It’s about having an idea, running with it and thinking, ‘OK, I can do this.’ I think that you need staff to be brave. You’re also looking for good leadership there as well – you need somebody to lead from the front.”

“The profession never fails to impress me,” Fhiona adds. “What teachers can do with little time and little resources can be humbling.”

Find out more about professional learning opportunities, resources and competitions from Scotland’s National Centre for Languages at www.scilt.org.uk or call 0141 444 8163.