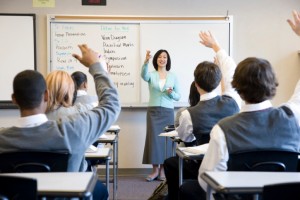 First Minister Nicola Sturgeon has confirmed that teacher’s jobs in Scottish schools next year are protected as all 32 councils have signed a deal ensuring their current numbers of teachers will not drop.

Many have welcomed the new deal to provide the proper number and best quality of teaching in Scotland’s schools hoping it will result in maintaining the highest quality of education throughout Scotland.

Many local authorities were hesitant toward the move however, resulting in Deputy First Minister John Swinney threatening to cut any council budgets if they did not agree and allowed their teacher’s numbers to drop.

This action has prompted an angry reaction from some of the councils as well as local government body, COSLA (Convention of Scottish Local Authorities) claiming they have been forced into the decision and were not consulted throughout the process.

Despite some local authorities being unhappy with the deal, it is good news for the education of Scotland as it will secure teachers’ jobs, improve education in schools, as well as creating new opportunities for those trying to get into the teaching profession.