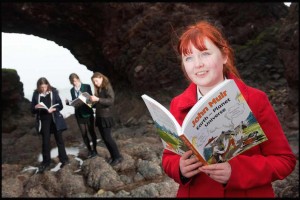 A graphic novel based on the life of conservationist John Muir has proven to shift young people’s attitudes towards and connection to the natural world, according to a recent study.

The novel, free copies of which were sent to every secondary school in Scotland last year, was intended to help S1-3 pupils develop a deeper understanding of the natural environment and the importance of wild places. Muir, a Scottish-born inventor, naturalist and writer, spent his life exploring wild places – and it seems his work, as documented in the book, has really inspired Scotland’s young people.

The study, released during John Muir week (18-26 April), shows that the format of a storied role model strongly impacted on the pupils who read the book.

Alette Willis PhD from the School of Health in Social Science at the University of Edinburgh, who carried out the research, said: “There are plenty of examples in the story of John Muir being and feeling connected to nature, of him valuing the rights of nature and acting to protect wild places. By looking at the results, it seems that shifts in the pupil’s attitudes match the orientation of the book, further supporting the idea that the book itself (and not just the environmental activities) played an important part in shifting pupil attitudes.”

One of the teachers interviewed for the evaluation said: “The graphic novel was an excellent way of engaging all our learners.”

Written by award-winning author Julie Bertagna and illustrated by Glasgow-based artist William Goldsmith, the novel was developed in partnership with John Muir Trust, Creative Scotland, Education Scotland and Scottish Natural Heritage. It was created in consultation with teachers and school pupils, and is supported by accompanying online resources for staff.

Pete Rawcliffe, Scottish Natural Heritage’s People & Places Unit Manager, said:
“We were pleased to support this practical and creative way of telling the John Muir story to children – and to many adults too! He remains an iconic Scottish figure whose thinking on the important role that nature plays in all our lives remains as relevant today as it was when he was alive. So we’re really encouraged by the findings of the study and the positive impact that this lively, fun book is having on young people.”