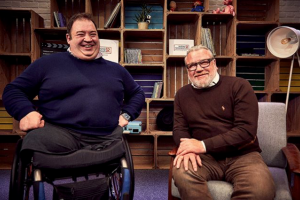 Injured veterans involved in military charity Blesma, The Limbless Veteran’s Making Generation R Programme have, for the last few years, been taking their life stories of overcoming adversity into schools.

Now, their inspiring tales are being shared with an even wider audience through a series of podcasts. The Resilience Sessions podcasts pair a Member with a well-known public figure, and the results have been a moving and thought-provoking series of talks.

“I think the Members have got a lot out of the talks,” says Blesma’s operations director Ian Waller.

“Self-worth and usefulness are powerful feelings, and these stories can inspire anyone. The workshops have been working so well in schools that we wanted to spread the message even further.”

And it seems to be working; the podcasts have been downloaded across 40 countries worldwide, with over 3500 listens, 600 subscribers, and topping the global podcast charts on iTunes at number 12 in its category and continues to grow with every episode, helping more people to develop their personal resilience.

“There were lots of people in my life who told my parents about all the things I would never do.” ~ Have you listened to the third episode of #TheResilienceSessions yet? In this week’s episode Blesma Member Nerys chats with Baroness Tanni Grey-Thompson about their need for every day resilience as wheelchair users, and how a little humour can go a long way. Click the link in our bio to have a listen. Let us know in the comments below what you think so far of #TheResilienceSessions — The Resilience Sessions is brought to you by Blesma, is supported by Openreach, and produced by The Drive Project. — #TheResilienceSessions @vicknhope @macaines @carolvorders @mrjonnybenjamin @thedriveproj #Blesma #podcast

The podcast features in-depth interviews shining a light on the life-changing experiences of veterans who have suffered devastating injuries. The personal struggles of celebrity guests are also showcased, detailing how they have fought to overcome hardship, with open and sometimes moving discussions of mental health problems, disability, injury and bereavement.

Each guest will share their inner most thoughts and feelings about resilience and adversity, and how it has shaped them.

The idea for the podcast was born after founder of creative social enterprise The Drive Project, Alice Driver, had a conversation with military veteran Si Harmer.

Si came close to death after losing both of his legs in an explosion in Afghanistan in 2009. During his rehabilitation he found nights in hospital to be lonely and sad, Si wished there had been something positive to listen to during this time.

Both founders of the podcast hope the interviews will inspire veterans and others who have faced similar difficulties and encourage their resilience against anxiety and low self-esteem.

The Resilience Sessions is brought to you by Blesma, The Limbless Veterans charity, and is based on an original idea by Simon Harmer and The Drive Project. The Resilience Sessions are supported by Openreach and produced by The Drive Project. The podcast is available from all major podcast platforms including iTunes, Google Podcasts, Spotify and more.