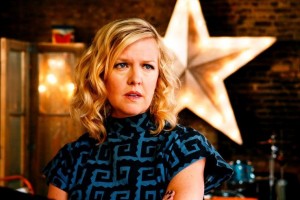 When I was at school it was the late 80s. I think I might been a wee bit of the odd kid – me and my pals were the people that wore hats and men’s jackets, Dr Martins with tartan ribbons, sprayed glittery gold. But even when I wore my Victorian shirt and my long skirt, I had my school tie on!

I was into everything that was quite wholesome, like the Duke of Edinburgh award, athletics club, piano lessons. I loved school and I really wanted to take everything that it had to offer. I remember there was one teacher who wrote on my report card: “Ashley is a very socially outgoing pupil.” I think I’ve always been good with the banter.

There was an amazing art teacher, he was called Mr Warwick. He filled me with such a lot of confidence. He wanted kids to understand – I think that can be really exhilarating. I remember him saying, “You could’ve gone to art school. Why didn’t you do it?” That was one of those things that stayed with me; he believed in me. He believed in people on whatever level they were at –  you didn’t have to be van Gogh.

We used to do musicals at the end of term and I just loved doing that. I liked sports day too. I used to do the 100 metres and I loved the smell of the grass – it was the smell of athletics season, it was brilliant. Not cross-country when you’re wheezing in the snow and the cold air in January!

At school, I was very positive and very focused on what I wanted to do – I always wanted to be an actress. The problem for me was that there was no drama department in my school. This is something that I’m beginning to spout forth about now; I really think it’s so important that schools should have a drama department.

Maybe not having a drama department made me slightly more determined to find it. I went to the National Youth Theatre when I was about 14 or 15 – I look back now and think how brave my mum was to let me go to London for a month and do that. I think that things like that give a person confidence. Suddenly, as a wee person coming from a rural town in Scotland, I was in London with a bunch of strangers and told to get on with it.

My mum was instrumental in being very supportive of my career. We were hauled into the deputy head’s office, and they said to her, “She wants to be an actress.” My mum just went, “That’s what she wants to do.” As a parent now, I think that must have been really scary for her.

As told to Lindsay Cochrane

All Stars, starring Ashley Jensen, is in cinemas 3 May.